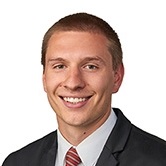 Cameron Ostrom grew up in Buffalo, Wyoming and moved to Sioux Falls in 2011 to go to the University of Sioux Falls where he played football and studied Business Administration. After completing his degree and graduating in 2015 he began working on his MBA as a graduate assistant for the USF Football team. In 2017, Cameron began his career in the financial services industry at Northwestern Mutual in Sioux Falls. In the summer of 2018 he began working full time as a Consumer Investment Representative for Security National Bank of South Dakota in Sioux Falls.

Cameron and his wife, Emily, love the Sioux Falls area and enjoy spending their free time reading at local coffee shops, walking around downtown, and spending time with friends. He is a fan of all things sports, and still gets his competitive fix by playing golf and basketball and watching all the big games. Cameron loves working with kids, and has spent time volunteering for multiple organizations in the community. Currently he coaches a flag football team for 3rd and 4th grade boys in the local FCA spring and fall leagues.

As a Financial Advisor, Cameron currently holds his Series 6, 7, 63, 66 registrations and life, health, and variable insurance licenses. He believes in always acting in the client’s best interest, making decisions with integrity and being open and honest at all times. He chose to work for Security National Bank because of the rich history and tradition of providing top level customer service and strives to do the same. Cameron’s focus is on helping clients manage financial risks while making efficient decisions with their dollars in order to most appropriately fit their needs.